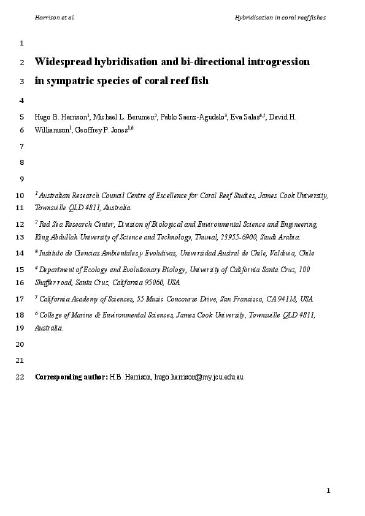 Coral reefs are highly diverse ecosystems, where numerous closely related species often coexist. How new species arise and are maintained in these high geneflow environments have been long-standing conundrums. Hybridization and patterns of introgression between sympatric species provide a unique insight into the mechanisms of speciation and the maintenance of species boundaries. In this study, we investigate the extent of hybridization between two closely related species of coral reef fish: the common coral trout (Plectropomus leopardus) and the bar-cheek coral trout (Plectropomus maculatus). Using a complementary set of 25 microsatellite loci, we distinguish pure genotype classes from first- and later-generation hybrids, identifying 124 interspecific hybrids from a collection of 2,991 coral trout sampled in inshore and mid-shelf reefs of the southern Great Barrier Reef. Hybrids were ubiquitous among reefs, fertile and spanned multiple generations suggesting both ecological and evolutionary processes are acting to maintain species barriers. We elaborate on these finding to investigate the extent of genomic introgression and admixture from 2,271 SNP loci recovered from a ddRAD library of pure and hybrid individuals. An analysis of genomic clines on recovered loci indicates that 261 SNP loci deviate from a model of neutral introgression, of which 132 indicate a pattern of introgression consistent with selection favouring both hybrid and parental genotypes. Our findings indicate genome-wide, bidirectional introgression between two sympatric species of coral reef fishes and provide further support to a growing body of evidence for the role of hybridization in the evolution of coral reef fishes.

We dedicate this work to our friend and colleague Glenn Almany who tragically passed away in March 2015. We are grateful to those who assisted us in the collection of coral trout: T Adkins, G Almany, K Boody, L Boström-Einarsson, M Bonin, T Bowling, R Brooker, M Cappo, P Costello, A Frisch, A Gainsford, N Gardiner, N Greenham, S Harte, M Heupel, N Ishma, S Kininmonth, T Mannering, G McGee, M Priest, D Simonson, C Simpfendorfer, T Sinclair-Taylor, D Stewart, M Srinivasan, B Taylor, P Waldie, R Weeks, C Wong and J Wong. We also thank B Sawynok and members of the Gladstone and Keppel Bay Sportfishing Clubs for their support. We acknowledge the assistance provided by the Australian Institute of Marine Science and the crew of the RV Cape Ferguson, P Williams at Keppel Reef Scuba Adventures and the D Stewart and the crew of the MV Kalinda. We also thank E Anderson for providing assistance with newhybrids. This work was supported by the King Abdullah University of Science and Technology (KAUST) awards CRG-1-2012-BER-002; OCRF-SPCF-2011-BER-001; Australian Research Council DE160101141; the National Environmental Research Program (NERP), Tropical Ecosystems Hub. It formed part of Project 8.3: The significance of no-take marine protected areas to regional recruitment and population persistence on the GBR. Additional support was provided by the ARC Centre of Excellence for Coral Reef Studies, the KAUST Red Sea Research Center and CONICYT-Fondecyt 11140121. Special thanks to G Bernardi, J H Choat and M Bernal for helpful discussions on a draft of the manuscript. We also thank anonymous reviewers and the editors of Axios Reviews for their constructive comments.