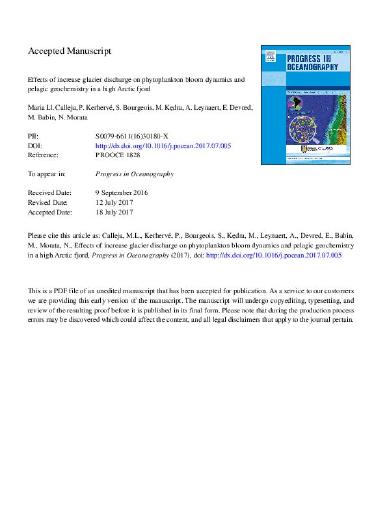 Arctic fjords experience extremely pronounced seasonal variability and spatial heterogeneity associated with changes in ice cover, glacial retreat and the intrusion of continental shelf’s adjacent water masses. Global warming intensifies natural environmental variability on these important systems, yet the regional and global effects of these processes are still poorly understood. In the present study, we examine seasonal and spatial variability in Kongsfjorden, on the western coast of Spitsbergen, Svalbard. We report hydrological, biological, and biogeochemical data collected during spring, summer, and fall 2012. Our results show a strong phytoplankton bloom with the highest chlorophyll a (Chla) levels ever reported in this area, peaking 15.5 µg/L during late May and completely dominated by large diatoms at the inner fjord, that may sustain both pelagic and benthic production under weakly stratified conditions at the glacier front. A progressively stronger stratification of the water column during summer and fall was shaped by the intrusion of warm Atlantic water (T > 3°C and Sal > 34.65) into the fjord at around 100 m depth, and by turbid freshwater plumes (T < 1°C and Sal < 34.65) at the surface due to glacier meltwater input. Biopolymeric carbon fractions and isotopic signatures of the particulate organic material (POM) revealed very fresh and labile material produced during the spring bloom (13C enriched, with values up to -22.7‰ at the highest Chl a peak, and high in carbohydrates and proteins content -up to 167 and 148 µg/L, respectively-), and a clear and strong continental signature of the POM present during late summer and fall (13C depleted, with values averaging -26.5 ‰, and high in lipid content –up to 92 µg/L-) when freshwater melting is accentuated. Our data evidence the importance of combining both physical (i.e. water mass dominance) and geochemical (i.e. characteristics of material released by glacier runoff) data in order to understand the timing, intensity and characteristics of the phytoplankton bloom in Kongsfjorden, a continuously changing system due to sustained warming. In a scenario where glacial retreat is predicted to increase the impacts of meltwater discharge and associated delivery of organic and inorganic material to the surrounding waters, special attention is required in order to predict the consequences for Arctic fjords and adjacent shelf ecosystems.

This research was part of the ECOTAB project funded by The French “Agence Nationale de la Recherche” (Ref: ANR-11-PDOC-0018) and the French Polar Institut Paul Emile Victor (IPEV). We thank the crew of the workboat MS Teistein and the Kings Bay personnel. We also thank Marion Maturilli and all AWIPEV personnel at Ny-Ålesund for dedicated, professional assistance and for providing meteorological data. We thank F. Narcy, J. Richard, E. Amice, A. Aubert, and G. Duong for their help on the field for samples collection and M. LeGoff, R. Corvaisier and B. Beker for nutrient and phytoplankton analyses. We also want to thank the anonymous reviewers who contributed a significant amount of effort to improving the manuscript. M. Ll. C. was funded by the Spanish Research Council, Consejo Superior de Investigaciones Cientificas (CSIC, grant JAEDOC030-2010) and co-funded by the Fondo Social Europeo (FSO). S.B was funded by the Conseil Général du Finistère (CG29). M. K. was further financed by Polish Ministry of Science and Higher Education grant number W70/ECOTAB/2014. We thank J. A. Hale for English corrections and constructive comments.