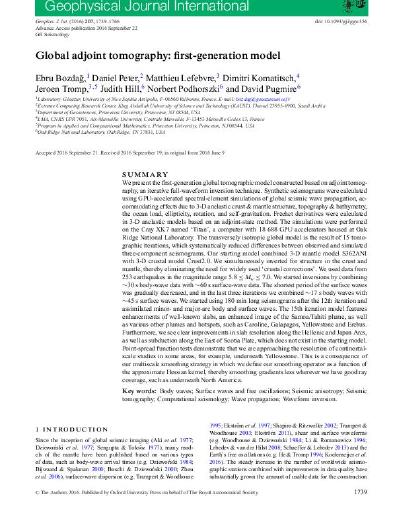 We present the first-generation global tomographic model constructed based on adjoint tomography, an iterative full-waveform inversion technique. Synthetic seismograms were calculated using GPU-accelerated spectral-element simulations of global seismic wave propagation, accommodating effects due to 3-D anelastic crust & mantle structure, topography & bathymetry, the ocean load, ellipticity, rotation, and self-gravitation. Fréchet derivatives were calculated in 3-D anelastic models based on an adjoint-state method. The simulations were performed on the Cray XK7 named 'Titan', a computer with 18 688 GPU accelerators housed at Oak Ridge National Laboratory. The transversely isotropic global model is the result of 15 tomographic iterations, which systematically reduced differences between observed and simulated three-component seismograms. Our starting model combined 3-D mantle model S362ANI with 3-D crustal model Crust2.0. We simultaneously inverted for structure in the crust and mantle, thereby eliminating the need for widely used 'crustal corrections'. We used data from 253 earthquakes in the magnitude range 5.8 ≤ M ≤ 7.0. We started inversions by combining ~30 s body-wave data with ~60 s surface-wave data. The shortest period of the surface waves was gradually decreased, and in the last three iterations we combined ~17 s body waves with ~45 s surface waves. We started using 180 min long seismograms after the 12th iteration and assimilated minor- and major-arc body and surface waves. The 15th iteration model features enhancements of well-known slabs, an enhanced image of the Samoa/Tahiti plume, as well as various other plumes and hotspots, such as Caroline, Galapagos, Yellowstone and Erebus. Furthermore, we see clear improvements in slab resolution along the Hellenic and Japan Arcs, as well as subduction along the East of Scotia Plate, which does not exist in the starting model. Point-spread function tests demonstrate that we are approaching the resolution of continentalscale studies in some areas, for example, underneath Yellowstone. This is a consequence of our multiscale smoothing strategy in which we define our smoothing operator as a function of the approximate Hessian kernel, thereby smoothing gradients less wherever we have good ray coverage, such as underneath North America.

ACKNOWLEDGEMENTS EBdedicates this manuscript to her parents, Zahire & HilmiBozdağ. This research used resources of the Oak Ridge Leadership Computing Facility, which is a DOE Office of Science User Facility supported under contract DE-AC05-00OR22725. Additional computational resources were provided by the Princeton Institute for Computational Science & Engineering (PICSciE). We acknowledge IRIS (iris.edu) and ORFEUS (orfeus-eu.org) for providing the data used in this study. We gratefully acknowledge editor Gabi Laske, Carl Tape and an anonymous reviewer for constructive feedback which improved the manuscript. We thank Heiner Igel, Suzan van der Lee, Guust Nolet, Jeroen Ritsema, Frederik J. Simons and Jeannot Trampert for their support and fruitful discussions. We also thank Wenjie Lei and Youyi Ruan for providing 40 reinverted CMT solutions for tests with an independent set of earthquakes, and Yanhua Yuan, Ryan Modrak, Vadim Monteiller, Lion Krischer and James Smith for various discussions on FWI. The open source spectral-element software package SPECFEM3D_GLOBE and the seismic measurement software package FLEXWIN used for this article are freely available via the Computational Infrastructure for Geodynamics (CIG; geodynamics.org). This research was supported by NSF grant 1112906. EB was partly supported by her UNS-CNRS Chaire d'Excellence grant.