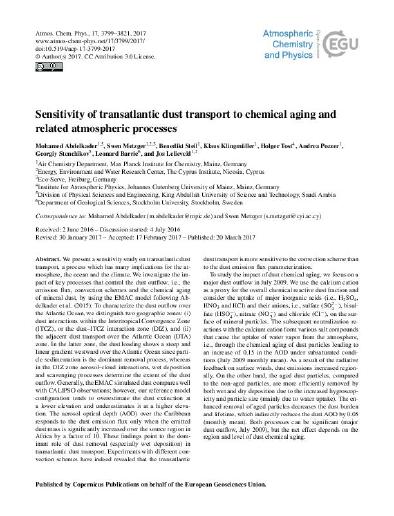 We present a sensitivity study on transatlantic dust transport, a process which has many implications for the atmosphere, the ocean and the climate. We investigate the impact of key processes that control the dust outflow, i.e., the emission flux, convection schemes and the chemical aging of mineral dust, by using the EMAC model following Abdelkader et al. (2015). To characterize the dust outflow over the Atlantic Ocean, we distinguish two geographic zones: (i) dust interactions within the Intertropical Convergence Zone (ITCZ), or the dust–ITCZ interaction zone (DIZ), and (ii) the adjacent dust transport over the Atlantic Ocean (DTA) zone. In the latter zone, the dust loading shows a steep and linear gradient westward over the Atlantic Ocean since particle sedimentation is the dominant removal process, whereas in the DIZ zone aerosol–cloud interactions, wet deposition and scavenging processes determine the extent of the dust outflow. Generally, the EMAC simulated dust compares well with CALIPSO observations; however, our reference model configuration tends to overestimate the dust extinction at a lower elevation and underestimates it at a higher elevation. The aerosol optical depth (AOD) over the Caribbean responds to the dust emission flux only when the emitted dust mass is significantly increased over the source region in Africa by a factor of 10. These findings point to the dominant role of dust removal (especially wet deposition) in transatlantic dust transport. Experiments with different convection schemes have indeed revealed that the transatlantic dust transport is more sensitive to the convection scheme than to the dust emission flux parameterization. To study the impact of dust chemical aging, we focus on a major dust outflow in July 2009. We use the calcium cation as a proxy for the overall chemical reactive dust fraction and consider the uptake of major inorganic acids (i.e., H2SO4, HNO3 and HCl) and their anions, i.e., sulfate (SO42−), bisulfate (HSO4−), nitrate (NO3−) and chloride (Cl−), on the surface of mineral particles. The subsequent neutralization reactions with the calcium cation form various salt compounds that cause the uptake of water vapor from the atmosphere, i.e., through the chemical aging of dust particles leading to an increase of 0.15 in the AOD under subsaturated conditions (July 2009 monthly mean). As a result of the radiative feedback on surface winds, dust emissions increased regionally. On the other hand, the aged dust particles, compared to the non-aged particles, are more efficiently removed by both wet and dry deposition due to the increased hygroscopicity and particle size (mainly due to water uptake). The enhanced removal of aged particles decreases the dust burden and lifetime, which indirectly reduces the dust AOD by 0.05 (monthly mean). Both processes can be significant (major dust outflow, July 2009), but the net effect depends on the region and level of dust chemical aging.

All simulations in this study were carried out on the Cy-Tera cluster. The Cy-Tera project (NEA-Y 5 O 1 OMH/6 TPATH/0308/31) is cofinanced by the European Regional Development Fund and the Republic of Cyprus through the Research Promotion Foundation. This study received funding from the European Research Council under the European Union’s Seventh Framework Programme (FP7; 2007–2013; ERC grant agreement no. 226144). The authors are grateful to NASA and PHOTONS (PHOtométrie pour le Traitement Opérationnel de Normalisation Satellitaire; Univ. of Lille 1, CNES and CNRS-INSU), a federation of ground-based remote-sensing aerosol networks that establish the AErosol RObotic NETwork program (http://aeronet.gsfc.nasa.gov), for the AERONET data used in this study. Georgiy Stenchikov is supported by the King Abdullah University of Science and Technology (KAUST) CRG3 grant. This work was performed at the The Cyprus Institute.