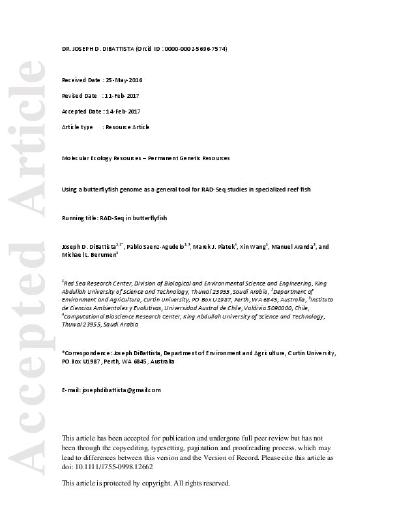 Data from a large-scale restriction site associated DNA (RAD-Seq) study of nine butterflyfish species in the Red Sea and Arabian Sea provided a means to test the utility of a recently published draft genome (Chaetodon austriacus) and assess apparent bias in this method of isolating nuclear loci. We here processed double-digest restriction-site (ddRAD) associated DNA sequencing data to identify single nucleotide polymorphism (SNP) markers and their associated function with and without our reference genome to see if it improves the quality of RAD-Seq markers. Our analyses indicate (1) a modest gap between the number of non-annotated versus annotated SNPs across all species, (2) an advantage of using genomic resources for closely related but not distantly related butterflyfish species based on the ability to assign putative gene function to SNPs, and (3) an enrichment of genes among sister butterflyfish taxa related to calcium transmembrane transport and binding. The latter result highlights the potential for this approach to reveal insights into adaptive mechanisms in populations inhabiting challenging coral reef environments such as the Red Sea, Arabian Sea, and Arabian Gulf with further study.

This research was supported by the KAUST Office of Competitive Research Funds (OCRF) under Award No. CRG-1-2012-BER-002 and baseline research funds to M.L.B., as well as a National Geographic Society Grant 9024-11 to J.D.D. For support in Socotra, we kindly thank the Ministry of Water and Environment of Yemen, staff at the Environment Protection Authority (EPA) Socotra, and especially Salah Saeed Ahmed, Fouad Naseeb and Thabet Abdullah Khamis, as well as Ahmed Issa Ali Affrar from Socotra Specialist Tour for handling general logistics. For logistic support elsewhere, we thank Eric Mason at Dream Divers in Saudi Arabia; the Red Sea State Government and The Red Sea University in Sudan, as well as Equipe Cousteau including N. Hussey, S. Kessel, C. Scarpellini, and M. Younis; Nicolas Prévot at Dolphin Divers and the crew of the M/V Deli in Djibouti; the KAUST Coastal and Marine Resources Core Lab and Amr Gusti; and the Ministry of Agriculture and Fisheries in Oman including Abdul Karim. For specimen collections, we thank Tilman Alpermann, Giacomo Bernardi, Brian Bowen, Camrin Braun, Richard Coleman, Michelle Gaither, Jean-Paul Hobbs, Jennifer McIlwain, Gerrit Nanninga, Mark Priest, Luiz Rocha, Tane Sinclair-Taylor, and members of the Reef Ecology Lab at KAUST. For assistance with bench work at KAUST we thank Craig Michell. We also acknowledge important contributions from Luiz Rocha and David Catania for assistance with specimen archiving at the California Academy of Sciences, Tane Sinclair-Taylor for formatting figures at later stages, and the KAUST Bioscience Core Laboratory with Sivakumar Neelamegam and Hicham Mansour for their assistance with Illumina sequencing.

Is Supplemented By:
References: