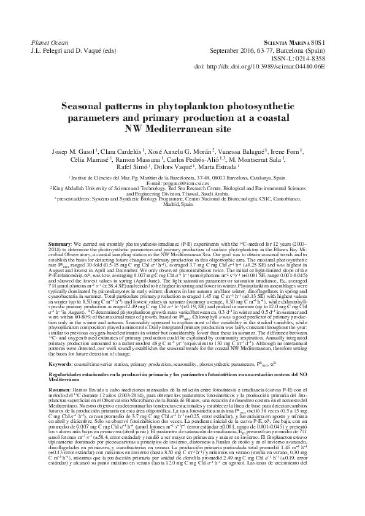 We carried out monthly photosynthesis-irradiance (P-E) experiments with the 14C-method for 12 years (2003–2014) to determine the photosynthetic parameters and primary production of surface phytoplankton in the Blanes Bay Microbial Observatory, a coastal sampling station in the NW Mediterranean Sea. Our goal was to obtain seasonal trends and to establish the basis for detecting future changes of primary production in this oligotrophic area. The maximal photosynthetic rate PBmax ranged 30-fold (0.5-15 mg C mg Chl a–1 h–1), averaged 3.7 mg C mg Chl a–1 h–1 (±0.25 SE) and was highest in August and lowest in April and December. We only observed photoinhibition twice. The initial or light-limited slope of the P-E relationship, αB, was low, averaging 0.007 mg C mg Chl a–1 h–1 (μmol photons m–2 s–1)–1 (±0.001 SE, range 0.001-0.045) and showed the lowest values in spring (April-June). The light saturation parameter or saturation irradiance, EK, averaged 711 μmol photons m–2 s–1 (±58.4 SE) and tended to be higher in spring and lower in winter. Phytoplankton assemblages were typically dominated by picoeukaryotes in early winter, diatoms in late autumn and late winter, dinoflagellates in spring and cyanobacteria in summer. Total particulate primary production averaged 1.45 mg C m–3 h–1 (±0.13 SE) with highest values in winter (up to 8.50 mg C m–3 h–1) and lowest values in summer (summer average, 0.30 mg C m–3 h–1), while chlorophyll-specific primary production averaged 2.49 mg C mg Chl a–1 h–1 (±0.19, SE) and peaked in summer (up to 12.0 mg C mg Chl a–1 h–1 in August). 14C-determined phytoplankton growth rates varied between ca. 0.3 d–1 in winter and 0.5 d–1 in summer and were within 60-80% of the maximal rates of growth, based on PBmax. Chlorophyll a was a good predictor of primary production only in the winter and autumn. Seasonality appeared to explain most of the variability in the studied variables, while phytoplankton composition played a minor role. Daily integrated primary production was fairly constant throughout the year: similar to previous oxygen-based estimates in winter but considerably lower than these in summer. The difference between 14C- and oxygen-based estimates of primary production could be explained by community respiration. Annually integrated primary production amounted to a rather modest 48 g C m–2 yr–1 (equivalent to 130 mg C m–2 d–1). Although no interannual patterns were detected, our work soundly establishes the seasonal trends for the coastal NW Mediterranean, therefore setting the basis for future detection of change.