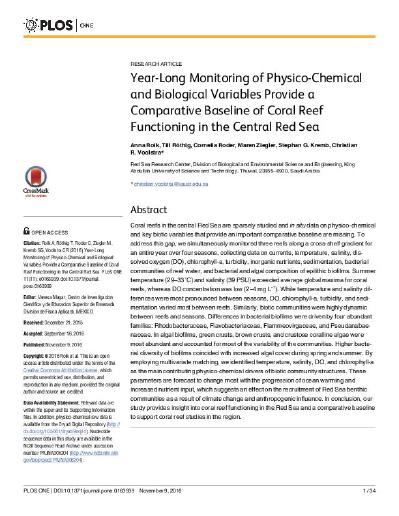 Coral reefs in the central Red Sea are sparsely studied and in situ data on physico-chemical and key biotic variables that provide an important comparative baseline are missing. To address this gap, we simultaneously monitored three reefs along a cross-shelf gradient for an entire year over four seasons, collecting data on currents, temperature, salinity, dissolved oxygen (DO), chlorophyll-a, turbidity, inorganic nutrients, sedimentation, bacterial communities of reef water, and bacterial and algal composition of epilithic biofilms. Summer temperature (29–33°C) and salinity (39 PSU) exceeded average global maxima for coral reefs, whereas DO concentration was low (2–4 mg L-1). While temperature and salinity differences were most pronounced between seasons, DO, chlorophyll-a, turbidity, and sedimentation varied most between reefs. Similarly, biotic communities were highly dynamic between reefs and seasons. Differences in bacterial biofilms were driven by four abundant families: Rhodobacteraceae, Flavobacteriaceae, Flammeovirgaceae, and Pseudanabaenaceae. In algal biofilms, green crusts, brown crusts, and crustose coralline algae were most abundant and accounted for most of the variability of the communities. Higher bacterial diversity of biofilms coincided with increased algal cover during spring and summer. By employing multivariate matching, we identified temperature, salinity, DO, and chlorophyll-a as the main contributing physico-chemical drivers of biotic community structures. These parameters are forecast to change most with the progression of ocean warming and increased nutrient input, which suggests an effect on the recruitment of Red Sea benthic communities as a result of climate change and anthropogenic influence. In conclusion, our study provides insight into coral reef functioning in the Red Sea and a comparative baseline to support coral reef studies in the region.

We thank the team from the Coastal and Marine Resources Lab (CMOR) at King Abdullah University of Science and Technology (KAUST) for logistics and operations at sea (E. Al-Jahdali, A. Al-Jahdali, G. Al-Jahdali, R. Al-Jahdali, H. Al-Jahdali, F. Mallon, P. Muller, and D. Pallett), as well as for the assistance with the deployment of oceanographic instruments (CTDs, ADCPs) (L. Smith, M.D. Pantalita, and S. Mahmoud). We would like to acknowledge additional field assistance by C. Walcher. Research reported in this publication was supported by funding to CRV from King Abdullah University of Science and Technology (KAUST).