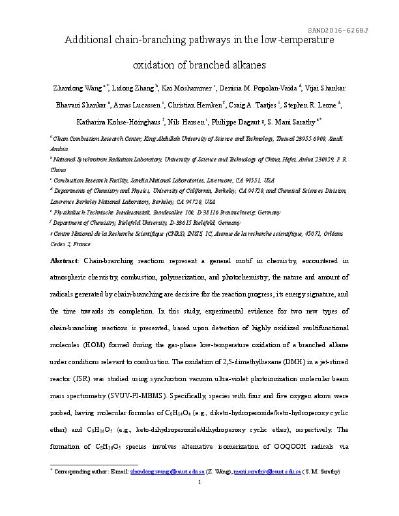 Chain-branching reactions represent a general motif in chemistry, encountered in atmospheric chemistry, combustion, polymerization, and photochemistry; the nature and amount of radicals generated by chain-branching are decisive for the reaction progress, its energy signature, and the time towards its completion. In this study, experimental evidence for two new types of chain-branching reactions is presented, based upon detection of highly oxidized multifunctional molecules (HOM) formed during the gas-phase low-temperature oxidation of a branched alkane under conditions relevant to combustion. The oxidation of 2,5-dimethylhexane (DMH) in a jet-stirred reactor (JSR) was studied using synchrotron vacuum ultra-violet photoionization molecular beam mass spectrometry (SVUV-PI-MBMS). Specifically, species with four and five oxygen atoms were probed, having molecular formulas of C8H14O4 (e.g., diketo-hydroperoxide/keto-hydroperoxy cyclic ether) and C8H16O5 (e.g., keto-dihydroperoxide/dihydroperoxy cyclic ether), respectively. The formation of C8H16O5 species involves alternative isomerization of OOQOOH radicals via intramolecular H-atom migration, followed by third O2 addition, intramolecular isomerization, and OH release; C8H14O4 species are proposed to result from subsequent reactions of C8H16O5 species. The mechanistic pathways involving these species are related to those proposed as a source of low-volatility highly oxygenated species in Earth's troposphere. At the higher temperatures relevant to auto-ignition, they can result in a net increase of hydroxyl radical production, so these are additional radical chain-branching pathways for ignition. The results presented herein extend the conceptual basis of reaction mechanisms used to predict the reaction behavior of ignition, and have implications on atmospheric gas-phase chemistry and the oxidative stability of organic substances. © 2015 The Combustion Institute.

This work was initiated by the Clean Combustion Research Center with funding from King Abdullah University of Science and Technology (KAUST) and Saudi Aramco under the FUELCOM program. Research reported in this publication was also supported by competitive research funding from KAUST. L.D.Z. is grateful for the support from National Key Scientific Instruments and Equipment Development Program of China (2012YQ22011305). The work of N.H., K.M., and C.A.T. was supported by the U.S. Department of Energy, Office of Science, Office of Basic Energy Sciences. D.M.P.V. and S.R.L. are supported by the Department of Energy Gas Phase Chemical Physics Program at Lawrence Berkeley National Laboratory, under contract DEAC02-05CH11231. D.M.P.V. is particularly grateful to the Alexander von Humboldt Foundation for a Feodor Lynen fellowship and she greatly acknowledges the technical support by James Breen, Erik Granlund and William Thur during the designing process and the fabrication of the JSR system. C.H. and K.K.H. are grateful for partial support by DFG within the large-scale research structure SFB 686, TP B3. P.D. has received funding from the European Research Council under the European Community's Seventh Framework Programme (FP7/2007-2013)/ERC grant agreement no. 291049-2G-CSafe. Sandia is a multi-program laboratory operated by Sandia Corporation, a Lockheed Martin Company, for the National Nuclear Security Administration under contract DE-AC04-94-AL85000. The Advanced Light Source is supported by the Director, Office of Science, Office of Basic Energy Sciences, of the U.S. Department of Energy under Contract No. DEAC02-05CH11231. We would like to thank Prof. Fei Qj for support and helpful discussions, and Lili Xing and Hao Zhao for technical support.