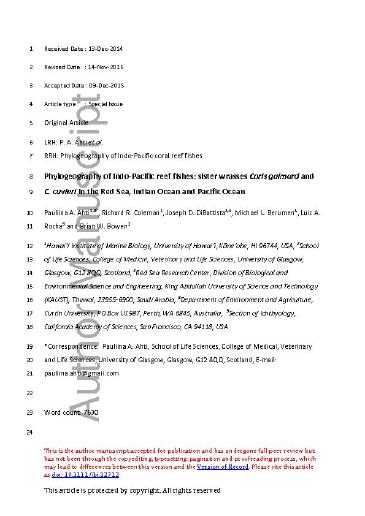 Aim: The aim of this study was to resolve the evolutionary history, biogeographical barriers and population histories for sister species of wrasses, the African Coris (Coris cuvieri) in the Indian Ocean and Red Sea, and the Yellowtail Coris (Coris gaimard) in the Pacific Ocean. Glacial sea level fluctuations during the Pleistocene have shaped the evolutionary trajectories of Indo-Pacific marine fauna, primarily by creating barriers between the Red Sea, Indian Ocean and Pacific Ocean. Here, we evaluate the influence of these episodic glacial barriers on sister species C. cuvieri and C. gaimard. Location: Red Sea, Indian Ocean, Pacific Ocean. Methods: Sequences from mitochondrial DNA cytochrome oxidase c subunit I (COI), and nuclear introns gonadotropin-releasing hormone (GnRH) and ribosomal S7 protein were analysed in 426 individuals from across the range of both species. Median-joining networks, analysis of molecular variance and Bayesian estimates of the time since most recent common ancestor were used to resolve recent population history and connectivity. Results: Cytochrome oxidase c subunit I haplotypes showed a divergence of 0.97% between species, and nuclear alleles were shared between species. No population structure was detected between the Indian Ocean and Red Sea. The strongest signal of population structure was in C. gaimard between the Hawaiian biogeographical province and other Pacific locations (COI φST = 0.040-0.173, P < 0.006; S7 φST = 0.046, P < 0.001; GnRH φST = 0.022, P < 0.005). Time to most recent common ancestor is c. 2.12 Ma for C. cuvieri and 1.76 Ma for C. gaimard. Main conclusions: We demonstrate an Indian-Pacific divergence of < 2 Myr and high contemporary gene flow between the Red Sea and Indian Ocean, mediated in part by the long pelagic larval stage. The discovery of hybrids at Christmas Island indicates that Indian and Pacific lineages have come into secondary contact after allopatric isolation. Subspecies status may be appropriate for these two wrasses.