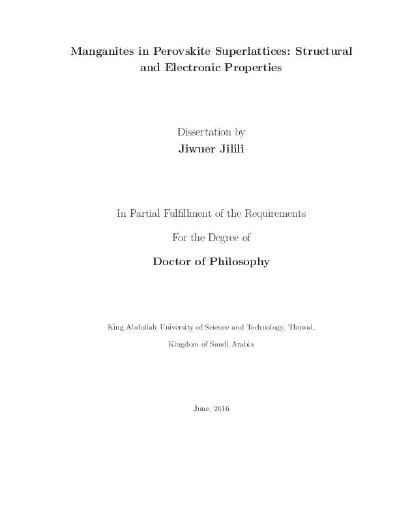 Perovskite oxides have the general chemical formula ABO3, where A is a rare-earth or alkali-metal cation and B is a transition metal cation. Perovskite oxides can be formed with a variety of constituent elements and exhibit a wide range of properties ranging from insulators, metals to even superconductors. With the development of growth and characterization techniques, more information on their physical and chemical properties has been revealed, which diversified their technological applications. Perovskite manganites are widely investigated compounds due to the discovery of the colossal magnetoresistance effect in 1994. They have a broad range of structural, electronic, magnetic properties and potential device applications in sensors and spintronics. There is not only the technological importance but also the need to understand the fundamental mechanisms of the unusual magnetic and transport properties that drive enormous attention. Manganites combined with other perovskite oxides are gaining interest due to novel properties especially at the interface, such as interfacial ferromagnetism, exchange bias, interfacial conductivity. Doped manganites exhibit diverse electrical properties as compared to the parent compounds. For instance, hole doped La0.7Sr0.3MnO3 is a ferromagnetic metal, whereas LaMnO3 is an antiferromagnetic insulator. Since manganites are strongly correlated systems, heterojunctions composed of manganites and other perovskite oxides are sunject to complex coupling of the spin, orbit, charge, and lattice degrees of freedom and exhibit unique electronic, magnetic, and transport properties. Electronic reconstructions, O defects, doping, intersite disorder, magnetic proximity, magnetic exchange, and polar catastrophe are some effects to explain these interfacial phenomena. In our work we use first-principles calculations to study the structural, electronic, and magnetic properties of manganite based superlattices. Firstly, we investigate the electronic structure of bulk CaMnO3 and LaNiO3. An onsite Coulomn interaction term U is tested for both the Mn and Ni atoms. G-type antiferromagnetism and insulating properties of CaMnO3 are reproduced with U = 3 eV and ferromagnetic ordering is favorable when CaMnO3 is strained to the substrate lattice constant. This implies that the CaMnO3 magnetism is sensitive to both strain and the U parameter. Antiparallel orientation of the Mn and Ti moments has been found experimentally in the BiMnO3/SrTiO3 superlattice. By introducing O defects at different layers, we find similar patterns when the defect is located in the BiO layer. The structural, electronic and magnetic properties are analysed. Strong hybridization between the d3z2−r2 orbitals of the Mn and Ti atoms near the O defect is found. The effect of uniaxial strain for the formation of a two-dimensional electron gas and the interfacial Ti magnetic moments of the (LaMnO3)2/(SrTiO3)2 superlattice are investigated. By tuning the strain state from compressive to tensile, we predict under which conditions the spin-polarization of the electron gas is enhanced. Since the thickness ratio of the superlattice correlates with the strain state, we also study the structural, electronic and magnetism trends of (LaMnO3)n/(SrTiO3)m superlattices with varying layer thicknesses. The main finding is that half-metallicity will vanish for n, m > 8. Reduction of the minority band gaps with increasing n and m originates mainly from an energetic downshift of the Ti dxy states. Along with these, the interrelation between the interface geometry and the electronic properties of the antiferromagnetic/ferromagnetic superlattice BiFeO3/ La0.7Sr0.3MnO3 is investigated. The magnetic and optical properties are also analysed by first principles calculations. The half-metallic character of bulk La0.7Sr0.3MnO3 is maintained in the superlattice, which implies potential applications on spintronics and memory devices.