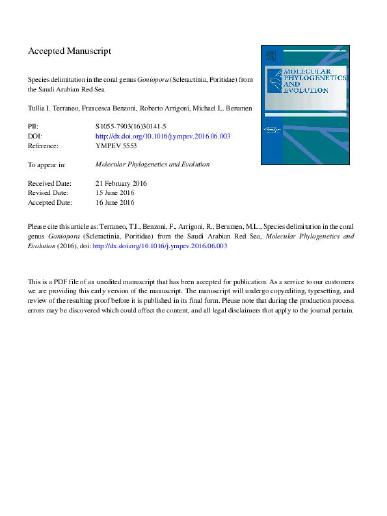 Variable skeletal morphology, genotype induced plasticity, and homoplasy of skeletal structures have presented major challenges for scleractinian coral taxonomy and systematics since the 18th century. Although the recent integration of genetic and micromorphological data is helping to clarify the taxonomic confusion within the order, phylogenetic relationships and species delimitation within most coral genera are still far from settled. In the present study, the species boundaries in the scleractinian coral genus Goniopora were investigated using 199 colonies from the Saudi Arabian Red Sea and sequencing of four molecular markers: the mitochondrial intergenic spacer between CytB and NAD2, the nuclear ribosomal ITS region, and two single-copy nuclear genes (ATPsβ and CalM). DNA sequence data were analyzed using a variety of methods and exploratory species-delimitation tools. The results were broadly congruent in identifying five distinct molecular lineages within the sequenced Goniopora samples: G. somaliensis/G. savignyi, G. djiboutiensis/G. lobata, G. stokesi, G. albiconus/G. tenuidens, and G. minor/G. gracilis. Although the traditional macromorphological characters used to identify these nine morphospecies were not able to discriminate the obtained molecular clades, informative micromorphological and microstructural features (such as the micro-ornamentation and the arrangement of the columella) were recovered among the five lineages. Moreover, unique in vivo morphologies were associated with the genetic-delimited lineages, further supporting the molecular findings. This study represents the first attempt to identify species boundaries within Goniopora using a combined morpho-molecular approach. The obtained data establish a basis for future taxonomic revision of the genus, which should include colonies across its entire geographical distribution in the Indo-Pacific.

This project was supported in part by funding from KAUST (Office of Competitive Research Funding award CRG-1-BER-002 and baseline research funds to ML Berumen). We wish to thank the captain and crew of the M/Y Dream Master and the KAUST Coastal and Marine Resources Core Lab for fieldwork logistics in Red Sea. We are grateful to E Karsenti (EMBL), E Bougois (Tara Expeditions), and the OCEANS Consortium for allowing sampling during the Tara Oceans expedition in Djibouti. We thank the commitment of the following people and sponsors who made the Tara expedition possible: CNRS, EMBL, Genoscope/CEA, VIB, Stazione Zoologica Anton Dohrn, UNIMIB, ANR (projects POSEIDON/ANR-09-BLAN-0348, BIOMARKS/ANR-08-BDVA-003, PROMETHEUS/ANR-09-GENM-031, and TARA-GIRUS/ANR-09-PCS-GENM-218), EU FP7 (MicroB3/No.287589), FWO, BIO5, Biosphere 2, agnès b., the Veolia Environment Foundation, Region Bretagne, World Courier, Illumina, Cap L’Orient, the EDF Foundation EDF Diversiterre, FRB, the Prince Albert II de Monaco Foundation, Etienne Bourgois, as well as the Tara schooner and its captain and crew. Tara Oceans would not exist without continuous support from 23 institutions (http://oceans.taraexpeditions.org). This article is contribution number XXX of the Tara Oceans Expedition 2009–2012. We are also grateful to E Dutrieux, CH Chaineau (Total SA), R Hirst, and M Abdul Aziz (YLNG) for allowing and supporting research in Yemen. We wish to thank AR Behzad (KAUST) for technical assistance with SEM specimen preparation, “Malek” AK Gusti (KAUST) for fieldwork assistance, and Tane H Sinclair-Taylor (KAUST) for assistance with graphics.