Role of Carboxylate ligands in the Synthesis of AuNPs: Size Control, Molecular Interaction and Catalytic Activity 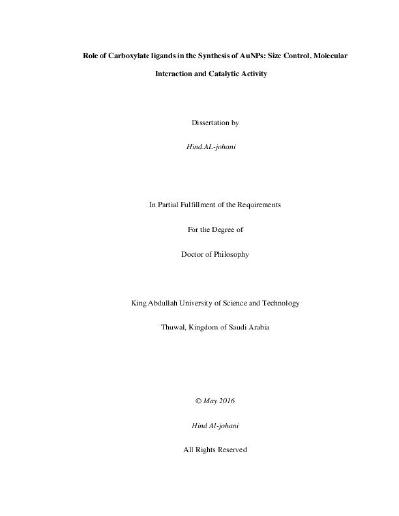 Nanoparticles (NPs) are the basis of nanotechnology and finding numerous applications in various fields such as health, electronics, environment, personal care products, transportation, and catalysis. To fulfill these functions, the nanoparticles must be synthesized, passivated to control their chemical reactivity, stabilized against aggregation and functionalized to achieve specific performances. The chemistry of metal nanoparticles especially that of noble metals (Gold, Platinum…) is a growing field. The nanoparticles have indeed different properties from those of the corresponding bulk material. These properties are largely influenced by several parameters; the most important are the size, shape, and the local environment of the nanoparticles. One of the most common synthetic methods for the preparation of gold nanoparticles (AuNPs) is based on stabilization by citrate. Since it was reported first by Turkevich et al. in 1951, this synthetic scheme has been widely used, studied and a substantial amount of important information regarding this system has been reported in the literature. The most popular method developed by Frens for controlling the size of the noble gold nanoparticles based on citrate was achieved by varying the concentration of sodium citrate. Despite a large number of investigations focused on utilizing Cit-AuNPs, the structural details of citrate anions adsorbed on the AuNP surface are still unknown. It is known only that citrate anions “coordinate” to the metal surface by inner sphere complexation of the carboxylate groups and there are trace amounts of AuCl4−, Cl−, and OH− on the metal surface. Moreover, it is generally accepted that the ligand shell morphology of Au nanoparticles can be partly responsible for important properties such as oxidation of carbon monoxide. The use of Au-NPs in heterogeneous catalysis started mostly with Haruta who discovered the effect of particle size on the activity for carbon monoxide oxidation at low temperature. The structure of the citrate layer on the AuNP surface may be a key factor in gaining a more detailed understanding of nanoparticle formation and stabilization. This can be affecting the catalytic activity. These thoughts invited us to systematically examine the role of sodium citrate as a stabilizer of gold nanoparticles, which is the main theme of this thesis. This research is focused on three main objectives, controlling the size of the gold nanoparticles based on citrate (and other carboxylate ligands Trisodium citrate dihydrate, Isocitric Acid, Citric acid, Trimesic acid, Succinic Acid, Phthalic acid, Disodium glutarate, Tartaric Acid, Sodium acetate, Acetic Acid and Formic Acid by varying the concentration of Gold/sodium citrate, investigating the interaction of the citrate layer on the AuNP surface, and testing the activity of the Au/TiO2 catalysts for the oxidation of carbon monoxide. This thesis will be divided into five chapters. In Chapter 1, a general literature study on the various applications and methods of synthesis of Au nanoparticles is described. Then we present the main synthetic pathways of Au nanoparticles we selected. A part of the bibliographic study was given to the use of Au nanoparticles in catalysis. In Chapter 2, we give a brief description of the different experimental procedures and characterization techniques utilized over the course of the present work. The study of the size control and the interaction between gold nanoparticles and the stabilizer (carboxylate groups) was achieved by using various characterization techniques such as UV-visible spectroscopy, Transmission Electron Microscopy (TEM), X-ray diffraction (XRD), X-ray photoelectron spectroscopy (XPS), Nuclear Magnetic resonance spectroscopy (NMR) and Fourier transform infrared spectroscopy (FTIR). In Chapter 3, we discuss the synthesis and size control of Au nanoparticles by following the growth of these nanoparticles by UV-Visible spectroscopy and TEM. We then describe the effect of the concentrations and of various type of the stabilizer, and the post-synthesis treatment on gold nanoparticles size. In Chapter 4, we focus on determining the nature of the interactions at molecular level between citrate (and other carboxylate-containing ligands) and AuNP in terms of the mode of coordination at the surface, and the formal oxidation state of Au when interacting with these negatively charged carboxylate ligands (i.e., LX- in the Green formalism). We achieve this by combining very advanced 13C CP/MAS, 23Na MAS and low-temperature SSNMR, high-resolution transmission electron microscopy (HRTEM) and density functional theory (DFT) calculations. A particular emphasis will be based on SS-NMR. In Chapter 5, we study the influence of pretreatment of 1% Au/TiO2 catalysts on the resulting activity in the oxidation of carbon monoxide, the effect of the concentration and the type of the ligands on the catalytic activity. The catalysts were characterized by TPO, XRD, and TEM spectroscopy.