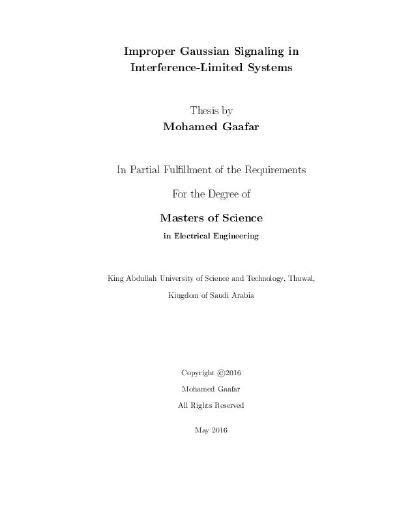 At the time of archiving, the student author of this thesis opted to temporarily restrict access to it. The full text of this thesis became available to the public after the expiration of the embargo on 2017-05-11.

In the last decade, wireless applications have witnessed a tremendous growth. This can be envisioned in the surge of smart devices which became almost in everyone's possession, demand for high speed connection and the internet of things (IoT) along with its enabling technologies. Hence, the multiuser interference became the main limiting factor in wireless communications. Moreover, just like diamonds and emeralds, the electromagnetic spectrum is limited and precious. Therefore, the high data rate application may not be satisfied by our current technologies. In order to solve this spectrum scarcity problem, researchers have steered their focus to develop new techniques such as cognitive radio (CR) and in-band full-duplex (FD). However, these systems suffer from the interference problem that can dramatically impede their quality-of-service (QoS). Therefore, investigating communication techniques/systems that can relieve the interference adverse signature becomes imperative. Improper Gaussian signaling (IGS) has been recently shown to outperform the traditional proper Gaussian signaling (PGS) in several interference-limited systems. In this thesis, we use IGS in order to mitigate the interference issue in three different communication settings. IGS has the ability to control the interference signal dimension, and hence, it can be considered as one form of interference alignment. In the first part, we investigate an underlay CR system with in-band FD primary users (PUs) and one-way communication for the secondary user (SU). IGS is employed to alleviate the interference introduced by the SU on the PUs. First, we derive a closed form expression and an upper bound for the SU and PUs outage probabilities, respectively. Second, we optimize the SU signal parameters, represented in its power and the circularity coefficient, to achieve the design objectives of the SU while satisfying certain QoS constraints for the PU under instantaneous, average and partial channel state information (CSI). Finally, we provide some numerical results that demonstrate the advantages that can be reaped by using IGS to access the spectrum of the FD PUs. Specifically, with the existence of week PU direct channels and/or strong SU interference channels, PGS tends to use less transmit power while IGS uses more power along with increasing the signal impropriety. Part 2 studies the potential employment of IGS in FD cooperative settings with non-negligible residual self-interference (RSI). In this part, IGS is used in an attempt to alleviate the RSI adverse effect in full-duplex relaying (FDR). To this end, we derive a tight upper bound expression for the end-to-end outage probability in terms of the relay signal parameters. We further show that the derived upper bound is either monotonic or unimodal in the relay's circularity coefficient. This result allows for easily locating the global optimal point using known numerical methods. Based on the analysis, IGS allows FDR systems to operate even with high RSI. It is shown that, while the communication totally fails with PGS as the RSI increases, the IGS outage probability approaches a fixed value that depends on the channel statistics and target rate. The obtained results show that IGS can leverage higher relay power budgets than PGS to improve the performance, meanwhile it relieves its RSI impact via tuning the signal impropriety. In part 3, we investigate the potential benefits of adopting IGS in a two-hop alternate relaying (AR) system. Given the known benefits of using IGS in interference-limited networks, we propose to use IGS to relieve the inter-relay interference (IRI) impact on the AR system assuming no CSI is available at the source. In this regard, we assume that the two relays use IGS and the source uses PGS. Then, we optimize the degree of impropriety of the relays signal, measured by the circularity coefficient, to maximize the total achievable rate. Simulation results show that using IGS yields a significant performance improvement over PGS, especially when the first hop is a bottleneck due to weak source-relay channel gains and/or strong IRI.