Surgeons and suture zones: Hybridization among four surgeonfish species in the Indo-Pacific with variable evolutionary outcomes 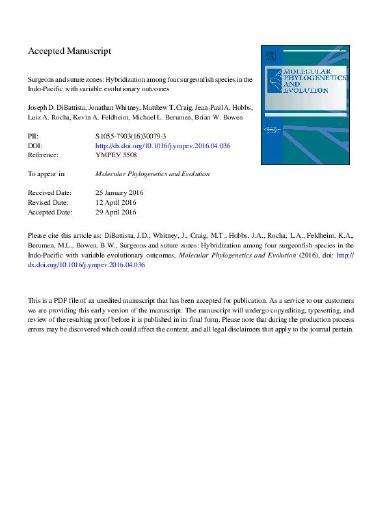 Closely related species can provide valuable insights into evolutionary processes through comparison of their ecology, geographic distribution and the history recorded in their genomes. In the Indo-Pacific, many reef fishes are divided into sister species that come into secondary contact at biogeographic borders, most prominently where Indian Ocean and Pacific Ocean faunas meet. It is unclear whether hybridization in this contact zone represents incomplete speciation, secondary contact, an evolutionary dead-end (for hybrids) or some combination of the above. To address these issues, we conducted comprehensive surveys of two widely-distributed surgeonfish species, Acanthurus leucosternon (N = 141) and A. nigricans (N = 412), with mtDNA cytochrome b sequences and ten microsatellite loci. These surgeonfishes are found primarily in the Indian and Pacific Oceans, respectively, but overlap at the Christmas and Cocos-Keeling Islands hybrid zone in the eastern Indian Ocean. We also sampled the two other Pacific members of this species complex, A. achilles (N = 54) and A. japonicus (N = 49), which are known to hybridize with A. nigricans where their ranges overlap. Our results indicate separation between the four species that range from the recent Pleistocene to late Pliocene (235,000 to 2.25 million years ago). The Pacific A. achilles is the most divergent (and possibly ancestral) species with mtDNA dcorr ≈ 0.04, whereas the other two Pacific species (A. japonicus and A. nigricans) are distinguishable only at a population or subspecies level (ΦST = 0.6533, P < 0.001). Little population structure was observed within species, with evidence of recent population expansion across all four geographic ranges. We detected sharing of mtDNA haplotypes between species and extensive hybridization based on microsatellites, consistent with later generation hybrids but also the effects of allele homoplasy. Despite extensive introgression, 98% of specimens had concordance between mtDNA lineage and species identification based on external morphology, indicating that species integrity may not be eroding. The A. nigricans complex demonstrates a range of outcomes from incomplete speciation to secondary contact to decreasing hybridization with increasing evolutionary depth.

Surgeons and suture zones: Hybridization among four surgeonfish species in the Indo-Pacific with variable evolutionary outcomes 2016 Molecular Phylogenetics and Evolution