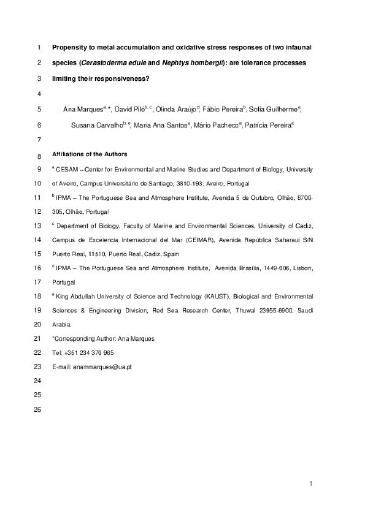 The chronic exposure of benthic organisms to metals in sediments can lead to the development of tolerance mechanisms, thus diminishing their responsiveness. This study aims to evaluate the accumulation profiles of V, Cr, Co, Ni, As, Cd, Pb and Hg and antioxidant system responses of two benthic organisms (Cerastoderma edule, Bivalvia; Nephtys hombergii, Polychaeta). This approach will provide clarifications about the ability of each species to signalise metal contamination. Organisms of both species were collected at the Tagus estuary, in two sites with distinct contamination degrees (ALC, slightly contaminated; BAR, highly contaminated). Accordingly, C. edule accumulated higher concentrations of As, Pb and Hg at BAR compared to ALC. However, antioxidant responses of C. edule were almost unaltered at BAR and no peroxidative damage occurred, suggesting adjustment mechanisms to the presence of metals. In contrast, N. hombergii showed a minor propensity to metal accumulation, only signalising spatial differences for As and Pb and accumulating lower concentrations of metals than C. edule. The differences in metal accumulation observed between species might be due to their distinctive foraging behaviour and/or the ability of N. hombergii to minimise the metal uptake. Despite that, the accumulation of As and Pb was on the basis of the polychaete antioxidant defences inhibition at BAR, including CAT, SOD, GR and GPx. The integrated biomarker response index (IBRv2) confirmed that N. hombergii was more affected by metal exposure than C. edule. In the light of current findings, in field-based studies, the information of C. edule as a bioindicator should be complemented by that provided by another benthic species, since tolerance mechanisms to metals can hinder a correct diagnosis of sediment contamination and of the system’s health. Overall, the present study contributed to improve the lack of fundamental knowledge of two widespread and common estuarine species, providing insights of the metal accumulation profiles under a scenario of chronic contamination. Finally, this work provided useful information that can be applied in the interpretation of future environmental monitoring studies.