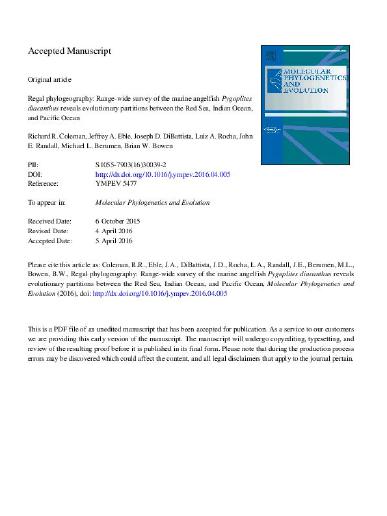 The regal angelfish (Pygoplites diacanthus; family Pomacanthidae) occupies reefs from the Red Sea to the central Pacific, with an Indian Ocean/Rea Sea color morph distinct from a Pacific Ocean morph. To assess population differentiation and evaluate the possibility of cryptic evolutionary partitions in this monotypic genus, we surveyed mtDNA cytochrome b and two nuclear introns (S7 and RAG2) in 547 individuals from 15 locations. Phylogeographic analyses revealed four mtDNA lineages (d = 0.006 – 0.015) corresponding to the Pacific Ocean, the Red Sea, and two admixed lineages in the Indian Ocean, a pattern consistent with known biogeographical barriers. Christmas Island in the eastern Indian Ocean had both Indian and Pacific lineages. Both S7 and RAG2 showed strong population-level differentiation between the Red Sea, Indian Ocean, and Pacific Ocean (ΦST = 0.066 – 0.512). The only consistent population sub-structure within these three regions was at the Society Islands (French Polynesia), where surrounding oceanographic conditions may reinforce isolation. Coalescence analyses indicate the Pacific (1.7 Ma) as the oldest extant lineage followed by the Red Sea lineage (1.4 Ma). Results from a median-joining network suggest radiations of two lineages from the Red Sea that currently occupy the Indian Ocean (0.7 – 0.9 Ma). Persistence of a Red Sea lineage through Pleistocene glacial cycles suggests a long-term refuge in this region. The affiliation of Pacific and Red Sea populations, apparent in cytochrome b and S7 (but equivocal in RAG2) raises the hypthosis that the Indian Ocean was recolonized from the Red Sea, possibly more than once. Assessing the genetic architecture of this widespread monotypic genus reveals cryptic evolutionary diversity that merits subspecific recognition.

This project was supported by the Seaver Institute (to BWB), the National Science Foundation (NSF) OCE-0929031 (BWB), NOAA National Marine Sanctuaries Program MOA grant No. 2005-008/66882 (R.J. Toonen), King Abdullah University of Science and Technology (KAUST) Office of Competitive Research Funds under Award no. CRG-1-2012-BER-002 and baseline research funds to MLB, as well as National Geographic Society Grant 9024-11 to JDD. RRC was supported by NSF grant DGE-1329626 and the Dr. Nancy Foster Scholarship program under Award no. NA15NOS4290067. This paper is funded in part by a grant/cooperative agreement from the National Oceanic and Atmospheric Administration, Project R/CR-14, which is sponsored by the University of Hawaii Sea Grant College Program, SOEST, under Institutional Grant No. NA05OAR4171048 (to BWB) from NOAA Office of Sea Grant, Department of Commerce. Fieldwork at Christmas Island was supported by National Geographic Grant 8208-07 (M.T. Craig). We thank Eric Mason and the crew at Dream Divers in Saudi Arabia, Nicolas Prévot at Dolphin Divers and the crew of the M/V Deli in Djibouti, the KAUST Coastal and Marine Resources Core Lab, the KAUST Reef Ecology Lab, Amr Gusti, the Administration of the British Indian Ocean Territory and Chagos Conservation Trust, as well as the University of Milano-Bicocca Marine Research and High Education Centre in Magoodhoo, the Ministry of Fisheries and Agriculture, Republic of Maldives, and the community of Maghoodhoo, Faafu Atoll. For assistance in collection efforts we thank Alfonso Alexander, Senifa Annandale, Howard Choat, Pat Colin, Lori Colin, Joshua Copus, Matthew Craig, Michelle Gaither, Brian Greene, Jean-Paul Hobbs, Garrett Johnson, Stephen Karl, Randall Kosaki, Cassie Lyons, David Pence, Mark Priest, Joshua Reece, D. Ross Robertson, Tane Sinclair-Taylor, Robert Thorne, and Robert Whitton. We thank the HIMB EPSCoR core facility and the University of Hawai‘i’s Advanced Studies in Genomics, Proteomics, and Bioinformatics facility for their assistance with DNA sequencing. We also thank Michelle Gaither, Brent Snelgrove, Robert Toonen, and members of the ToBo lab for their assistance, logistical support, and feedback throughout this project. Thanks to Tane Sinclair-Taylor for the graphical abstract images. Thanks to editor Giacomo Bernardi and one anonymous reviewer for critique and suggestions that improved the paper. The views expressed herein are those of the authors and do not necessarily reflect the views of NOAA or any of its subagencies. This is contribution #1653 from the Hawai‘i Institute of Marine Biology, #9592 from the School of Ocean and Earth Science and Technology, and #JC-06-03 from University of Hawai‘i Sea Grant Program.