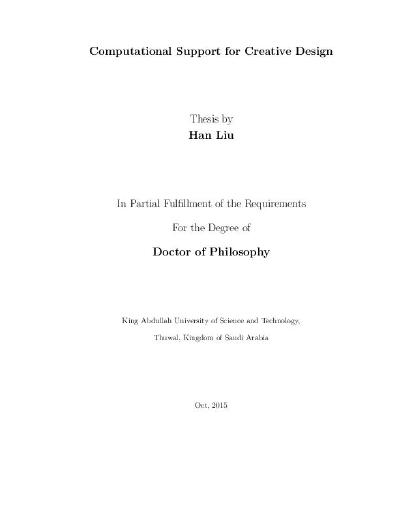 Supporting user designs of 3D contents remains a challenge in geometric modeling. Various modeling tools have been developed in recent years to facilitate architectural designs and artistic creations. However, these tools require both modeling skills and raw creativity. Instead of creating models from scratch, one of the most popular choices is to extract intrinsic patterns from exemplar inputs (e.g., shape collections and sketches), to produce creative models while preserving the patterns. The mod- eling process contains two main stages, analysis and synthesis. The analysis of input models is usually performed at component level, especially for man-made objects that can be decomposed into several semantic parts, for example, the seat and handles of a bicycle. The synthesis stage recombines parts of shapes to generate new models that usually have topological or geometric variations. In this thesis, we propose three design tools aimed at easing the modeling process. We focus on man-made objects and scenes such as buildings and furniture, as the functionality of such shapes can be analyzed at the component level. A relation graph, which is commonly used in shape analysis, can then be built to represent the input shapes. In our work, the graph nodes denote the elements of a model (i.e., rooms, shape parts, and strokes respectively), while the edges capture the intrinsic relations between connected elements. With the use of graph representations, we extract and present controllable components to users for supporting their designs. The emphasis of our work is on three aspects. Firstly, we propose a framework for supporting interior layout design, which allows users to manipulate the produced floor plans, i.e., changing the scales of rooms and their positions as well. When the user modifies the topology of a layout, the corresponding layout graph is updated and the room geometries are optimized under certain constraints, e.g., user specified scales, the adjacency of rooms, and fabrication considerations (i.e., economic construction cost). Secondly, we introduce replaceable substructures as arrangements of shape components that can be interchanged while ensuring boundary consistency. Based on the shape graphs that encode the structures of input models, we propose new automatic operations to discover replaceable substructures across models or within a model. We enforce a pair of subgraphs matching along their boundaries so that switching two subgraphs results in topological variations. Thirdly, we develop an interactive system that supports a freeform design by interpreting user sketches. 3D contents can be extracted from input strokes with or without user annotations. Our system accepts user strokes, analyzes their contacts and vanishing directions with respect to an anchored image, and projects 2D strokes to 3D space via a multi- stage optimization on spatial canvas selection. We demonstrate the computational approaches on a range of example models and design studies.