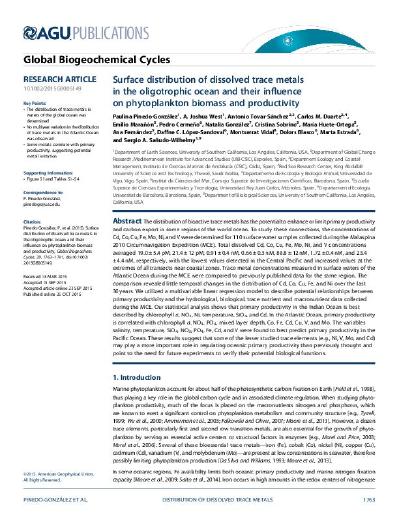 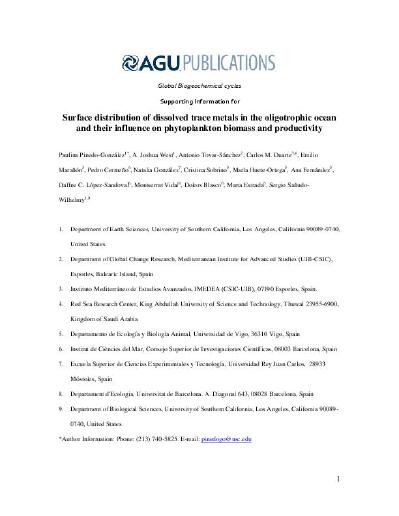 The distribution of bioactive trace metals has the potential to enhance or limit primary productivity and carbon export in some regions of the world ocean. To study these connections, the concentrations of Cd, Co, Cu, Fe, Mo, Ni, and V were determined for 110 surface water samples collected during the Malaspina 2010 Circumnavigation Expedition (MCE). Total dissolved Cd, Co, Cu, Fe, Mo, Ni, and V concentrations averaged 19.0 ± 5.4 pM, 21.4 ± 12 pM, 0.91 ± 0.4 nM, 0.66 ± 0.3 nM, 88.8 ± 12 nM, 1.72 ± 0.4 nM, and 23.4 ± 4.4 nM, respectively, with the lowest values detected in the Central Pacific and increased values at the extremes of all transects near coastal zones. Trace metal concentrations measured in surface waters of the Atlantic Ocean during the MCE were compared to previously published data for the same region. The comparison revealed little temporal changes in the distribution of Cd, Co, Cu, Fe, and Ni over the last 30 years. We utilized a multivariable linear regression model to describe potential relationships between primary productivity and the hydrological, biological, trace nutrient and macronutrient data collected during the MCE. Our statistical analysis shows that primary productivity in the Indian Ocean is best described by chlorophyll a, NO3, Ni, temperature, SiO4, and Cd. In the Atlantic Ocean, primary productivity is correlated with chlorophyll a, NO3, PO4, mixed layer depth, Co, Fe, Cd, Cu, V, and Mo. The variables salinity, temperature, SiO4, NO3, PO4, Fe, Cd, and V were found to best predict primary productivity in the Pacific Ocean. These results suggest that some of the lesser studied trace elements (e.g., Ni, V, Mo, and Cd) may play a more important role in regulating oceanic primary productivity than previously thought and point to the need for future experiments to verify their potential biological functions.

Surface distribution of dissolved trace metals in the oligotrophic ocean and their influence on phytoplankton biomass and productivity 2015, 29 (10):1763 Global Biogeochemical Cycles