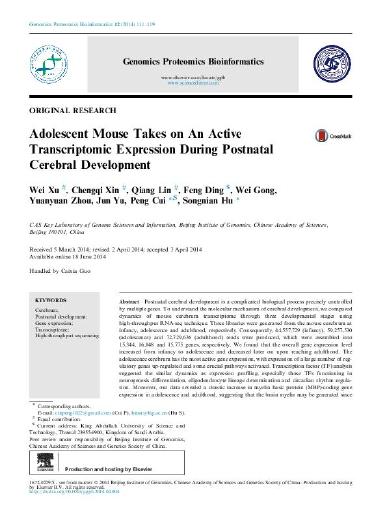 Postnatal cerebral development is a complicated biological process precisely controlled by multiple genes. To understand the molecular mechanism of cerebral development, we compared dynamics of mouse cerebrum transcriptome through three developmental stages using high-throughput RNA-seq technique. Three libraries were generated from the mouse cerebrum at infancy, adolescence and adulthood, respectively. Consequently, 44,557,729 (infancy), 59,257,530 (adolescence) and 72,729,636 (adulthood) reads were produced, which were assembled into 15,344, 16,048 and 15,775 genes, respectively. We found that the overall gene expression level increased from infancy to adolescence and decreased later on upon reaching adulthood. The adolescence cerebrum has the most active gene expression, with expression of a large number of regulatory genes up-regulated and some crucial pathways activated. Transcription factor (TF) analysis suggested the similar dynamics as expression profiling, especially those TFs functioning in neurogenesis differentiation, oligodendrocyte lineage determination and circadian rhythm regulation. Moreover, our data revealed a drastic increase in myelin basic protein (MBP)-coding gene expression in adolescence and adulthood, suggesting that the brain myelin may be generated since mouse adolescence. In addition, differential gene expression analysis indicated the activation of rhythmic pathway, suggesting the function of rhythmic movement since adolescence; Furthermore, during infancy and adolescence periods, gene expression related to axon. repulsion and attraction showed the opposite trends, indicating that axon repulsion was activated after birth, while axon attraction might be activated at the embryonic stage and declined during the postnatal development. Our results from the present study may shed light on the molecular mechanism underlying the postnatal development of the mammalian cerebrum. © 2014 .

Except where otherwise noted, this item's license is described as This file is an open access version redistributed from: https://doi.org/10.1016/j.gpb.2014.04.004