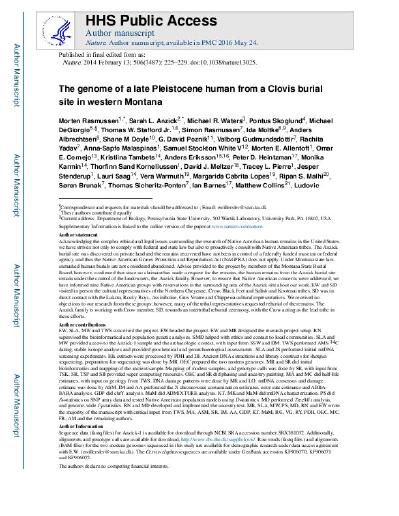 Clovis, with its distinctive biface, blade and osseous technologies, is the oldest widespread archaeological complex defined in North America, dating from 11,100 to 10,700 14 C years before present (bp) (13,000 to 12,600 calendar years bp). Nearly 50 years of archaeological research point to the Clovis complex as having developed south of the North American ice sheets from an ancestral technology. However, both the origins and the genetic legacy of the people who manufactured Clovis tools remain under debate. It is generally believed that these people ultimately derived from Asia and were directly related to contemporary Native Americans. An alternative, Solutrean, hypothesis posits that the Clovis predecessors emigrated from southwestern Europe during the Last Glacial Maximum. Here we report the genome sequence of a male infant (Anzick-1) recovered from the Anzick burial site in western Montana. The human bones date to 10,705 ± 35 14 C years bp (approximately 12,707-12,556 calendar years bp) and were directly associated with Clovis tools. We sequenced the genome to an average depth of 14.4× and show that the gene flow from the Siberian Upper Palaeolithic Mal'ta population into Native American ancestors is also shared by the Anzick-1 individual and thus happened before 12,600 years bp. We also show that the Anzick-1 individual is more closely related to all indigenous American populations than to any other group. Our data are compatible with the hypothesis that Anzick-1 belonged to a population directly ancestral to many contemporary Native Americans. Finally, we find evidence of a deep divergence in Native American populations that predates the Anzick-1 individual. © 2014 Macmillan Publishers Limited. All rights reserved.

We thank the Danish National High-throughput DNA Sequencing Centre for help with sequencing, B. Henn and J. Kidd for assistance with Human Genome Diversity Project data, J. Keene for help with illustrations, M. Li, P. L. F. Johnson and M. Stoneking for help with the mtDNA analysis, L. A. Lahren for input to the site description and for establishing contact with the Native American groups, and J. E. Morrow, S. Fiedel and E. Lorenzen for comments on the manuscript. GeoGenetics were supported by the Lundbeck Foundation and the Danish National Research Foundation (DNRF94). M. D. was supported by the US National Science Foundation (grant DBI-1103639). A.-S.M. was supported by the Swiss National Science foundation. G. D. P. was supported by National Science Foundation (NSF) graduate research fellowship DGE-1147470. M. M., M. K., K. T. and L. S. were supported by the European Regional Development Fund through the Centre of Excellence in Genomics to Estonian Biocentre and University of Tartu, Estonian Basic Research (grant SF0270177As08) and Estonian Science Foundation (grant 8973). Computations in Uppsala were performed on resources provided by SNIC-UPPMAX (project b2012063) and in Tartu using the High Performance Computing Centre of the University of Tartu. A. E., V. M. W., M. C. L., F. B. and A. M. were supported by the Biotechnology and Biological Sciences Research Council (grant P25032 and BB/H005854/1). We thank the North Star Archaeological Research Program, Center for the Study of the First Americans, Texas A&M University, E. Hill, and Stafford Research, Inc. for funding some of the project.