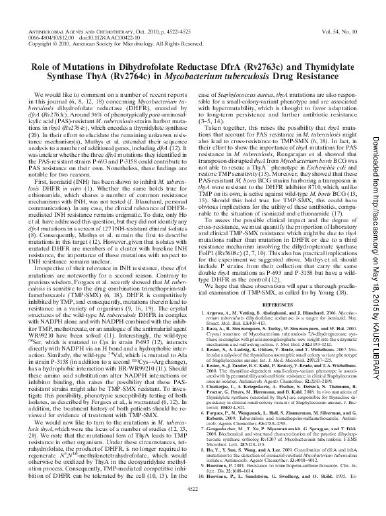 We would like to comment on a number of recent reports in this journal (6, 8, 12, 18) concerning Mycobacterium tuberculosis dihydrofolate reductase (DHFR), encoded by dfrA (Rv2763c). Around 36% of phenotypically para-aminosalicylic acid (PAS)-resistant M. tuberculosis strains harbor mutations in thyA (Rv2764c), which encodes a thymidylate synthase (20). In their effort to elucidate the remaining unknown resistance mechanism(s), Mathys et al. extended their sequence analysis to a number of additional genes, including dfrA (12). It was unclear whether the three dfrA mutations they identified in the PAS-resistant strains P-693 and P-3158 could contribute to PAS resistance on their own. Nonetheless, these findings are notable for two reasons. First, isoniazid (INH) has been shown to inhibit M. tuberculosis DHFR in vitro (1). Whether the same holds true for ethionamide, which shares a number of common resistance mechanisms with INH, was not tested (J. Blanchard, personal communication). In any case, the clinical relevance of DHFR-mediated INH resistance remains enigmatic. To date, only Ho et al. have addressed this question, but they did not identify any dfrA mutations in a screen of 127 INH-resistant clinical isolates (8). Consequently, Mathys et al. remain the first to describe mutations in this target (12). However, given that isolates with mutated DHFR are members of a cluster with baseline INH resistance, the importance of these mutations with respect to INH resistance remains unclear. Irrespective of their relevance in INH resistance, these dfrA mutations are noteworthy for a second reason. Contrary to previous wisdom, Forgacs et al. recently showed that M. tuberculosis is sensitive to the drug combination trimethoprim-sulfamethoxazole (TMP-SMX) (6, 18). DHFR is competitively inhibited by TMP, and consequently, mutations therein lead to resistance in a variety of organisms (9, 16, 19). The crystal structures of the wild-type M. tuberculosis DHFR in complex with NADPH alone and with NADPH combined with the inhibitor TMP, methotrexate, or an analogue of the antimalarial agent WR99210 have been solved (11). Interestingly, the wild-type 66Ser, which is mutated to Cys in strain P-693 (12), interacts directly with NADPH via an H bond and a hydrophobic interaction. Similarly, the wild-type 54Val, which is mutated to Ala in strain P-3158 (in addition to a second 110Cys→Arg change), has a hydrophobic interaction with BR-WR99210 (11). Should these amino acid substitutions alter NADPH interactions or inhibitor binding, this raises the possibility that these PAS-resistant strains might also be TMP-SMX resistant. To investigate this possibility, phenotypic susceptibility testing of both isolates, as described by Forgacs et al., is warranted (6, 12). In addition, the treatment history of both patients should be reviewed for evidence of treatment with TMP-SMX. We would now like to turn to the mutations in M. tuberculosis thyA, which were the focus of a number of studies (12, 13, 20). We note that the mutational loss of ThyA leads to TMP resistance in other organisms. Under these circumstances, tetrahydrofolate, the product of DHFR, is no longer required to regenerate N5,N10-methylenetetrahydrofolate, which would otherwise be oxidized by ThyA in the deoxyuridylate methylation process. Consequently, TMP-mediated competitive inhibition of DHFR can be tolerated by the cell (10, 13). In the case of Staphylococcus aureus, thyA mutations are also responsible for a small-colony-variant phenotype and are associated with hypermutability, which is thought to favor adaptation to long-term persistence and further antibiotic resistance (3-5, 14). Taken together, this raises the possibility that thyA mutations that account for PAS resistance in M. tuberculosis might also lead to cross-resistance to TMP-SMX (6, 18). In fact, in their effort to show the importance of thyA mutations for PAS resistance in M. tuberculosis, Rengarajan et al. showed that transposon-disrupted thyA from Mycobacterium bovis BCG was not able to rescue a ThyA− phenotype in Escherichia coli and restore TMP sensitivity (13). Moreover, they showed that these PAS-resistant M. bovis BCG strains harboring a transposon in thyA were resistant to the DHFR inhibitor 8710, which, unlike TMP on its own, is active against wild-type M. bovis BCG (13, 15). Should this hold true for TMP-SMX, this could have obvious implications for the utility of these antibiotics, comparable to the situation of isoniazid and ethionamide (17). To assess the possible clinical impact and the degree of cross-resistance, we must quantify the proportion of laboratory and clinical TMP-SMX resistance which might be due to thyA mutations rather than mutation in DHFR or due to a third resistance mechanism involving the dihydropteroate synthase FolP1 (Rv3608c) (2, 7, 10). This also has practical implications for the experiment we suggested above. Mathys et al. should include P strains from their collection that carry the same double thyA mutations as P-693 and P-3158 but have a wild-type DHFR as the control (12). We hope that these observations will spur a thorough preclinical examination of TMP-SMX, as called for by Young (18).